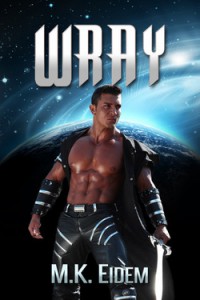 Well that was another different read for me!

I read this because I was amazed with the first book, Grim. This one is just as interesting! The plot isn't that hard to figure out. A human woman gets into the hands of bad aliens and is rescued by another alien who's honorable and good. They figure out their differences and fall for each other. But wait... There are so many obstacles when you love a person different from you. That is what readers should look forward to in this book. How does a couple disregard the difference in their culture and build a life together in the middle of it all?

Let's talk about the characters...

Wray is definitely different from Grim. While Grim was totally intense, Wray was is sweeter and more charming than his brother. He's strong, brave, smart and very bossy. He's an emperor, so I guess he does have the right to order people around. ;) Anyway, just like his brother, Wray values women more than himself or any other male. It's ingrained in him to be caring for women... Kim got the advantage and disadvantage of that fact. He's protective of Kim and that's a good thing. However, sometimes, he's also OVERPROTECTIVE, and that could be bad. What I love about his character though, is that he never doubted Kim. Kim was always GOOD in his eyes. I love that about him.

Kim on the other hand is a FIGHTER. She most definitely is a fighter. She's also a survivor. I love how she handled things and how she didn't dwell on the bad ones. She's someone who has been through something horrifying, but still managed to be who she is and not change that just because of the things she's been through. I love how she constantly reminds Wray that he too, is important. In a world wherein women rule, women should be revered, women are always right... Kim chose to be just herself. She didn't want to be above everybody else. She remained humble and that's a very good thing.


This book made me feel happy, sad, envious because I also want a WRAY OF MY OWN, angry of all the bad elements surrounding them and ultimately contented with how the book ended.